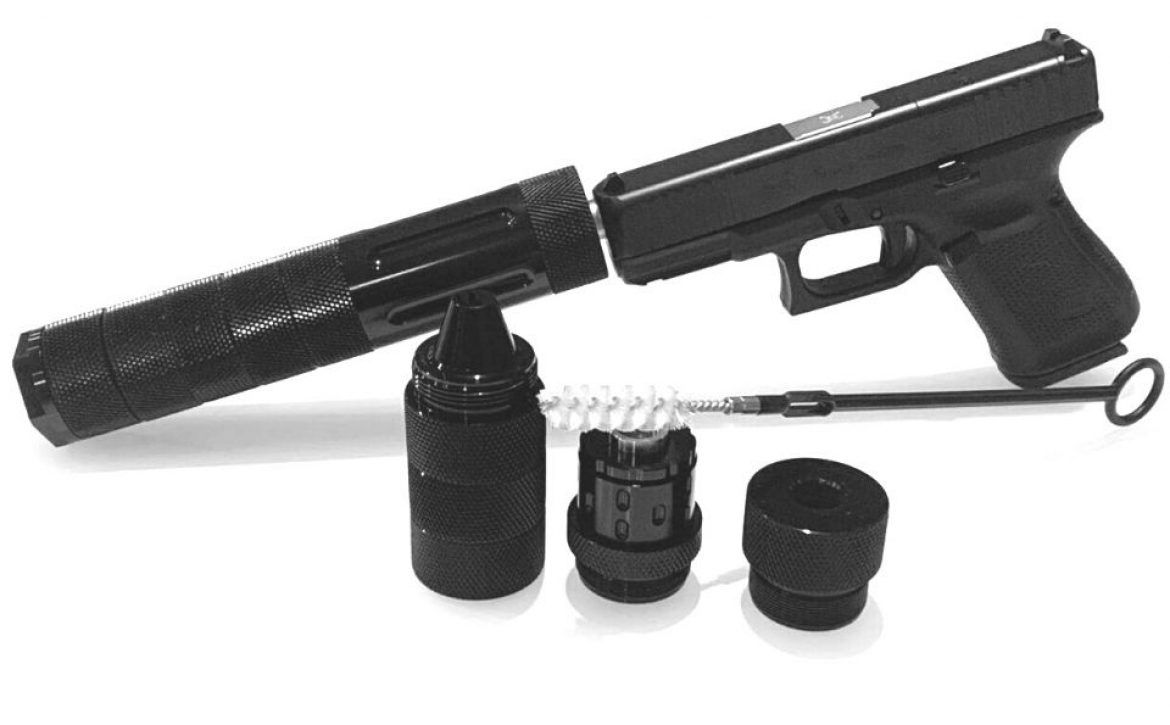 You might be shopping around for a solvent trap, a useful and effective firearm cleaning accessory. However, there are certain precautions you should take before doing so. For instance, you should be beware of online companies who do not “specialize” in solvent traps, and those who reference links in their blogs directing visitors (like you) to overseas companies who sell illegal items, not intended for cleaning, strapping, and/or storage.
Overseas companies list both illegal and low-grade solvent traps. Purchasing illegal solvent traps can result in a felony charge as the product is tied to your shipping address upon purchase. Armory Den only sells solvent traps for their intended use, which is to trap solvent. If you are looking to purchase a solvent trap legally for routine cleaning, to improve firearm safety, reliability and overall performance – Then we are the company for you!
This is why if you are serious about purchasing a firearm accessory to make your cleaning process more efficient, you should choose Armory Den. You don’t want to spend your hard earned money on a solvent trap for the purpose of cleaning and find out your order was seized or illegally purchased.

It’s important to share a few things on solvent trap cleaning solutions so you dont end up purchasing an illegal product manufactured for other intention. A monocore solvent trap is illegal and can result in a criminal offence when purchased because it has a hole in the center, and throughout the cylinder. Monocore products are the ‘spiral looking’ solvent traps that you should avoid if looking for a reliable cleaning accessory for your firearm cleaning process.
Again, we recommend refraining from purchasing these items or you might find yourself with an unexpected visit from the ATF, who will confiscate the item(s) on arrival. This is assuming your purchased monocore solvent trap makes it past customs. If your order is seized by customs, they will determine them to be under the ATF’s jurisdiction and send them to the ATF field office closest to your address and you will receive contact in person or a warning by letter.
According to a spokeswoman with the ATF, the purchase of a solvent trap is not illegal. However, if a solvent trap is constructed or has parts that the ATF deems are “intended” to make the device function as a suppressor (or silencer), it must be identified as such, and it must be appropriately regulated.
This is not Armory Den’s market, but it’s still important to educate our visitors to create awareness, as some companies sell them for other intended purposes, or buy them to use them for something else rather than their intended use, which is to trap solvent during bore cleaning. If you purchase a product from a home improvement store or local hardware store, you should use those products as intended. The same applies for those who purchase from our site.

Do not be fooled with verbiage that Chinese companies use when they list their illegal products, such as ‘fuel filter’ or ‘fuel cleaning system’. Once the consumer inputs their shipping address and submits their order, you are tied to that product.
Unfortunately, there isn’t a list of what the ATF/NFA defines as a legal vs. illegal solvent trap, interpretations can be made based on ‘constructive intent’. The ATF works with their NFA FATD “Firearms & Technology Division” counterparts to analyze individual parts, as well as the overall design of solvent traps to determine if they should be deemed unregistered suppressors, which are essentially illegal firearms parts.

Foreign Companies Are Not Bound By US Law

It is very important to note that Chinese companies are not bound by American laws, and it has been rumored that many of the Chinese suppliers include an end cap opener with their monocore solvent traps. This item screws on the end of the monocore in place of the sealed end cap and effectively “opens” the only sealed off passageway, providing a clear opening at the end of the monocore solvent trap, thus unambiguously converting it into an unregistered suppressor, for all intents and purposes.

Even if Chinese companies do not provide these ‘openers,’ the simple fact that they sell solvent traps with center-marks on their end caps(commonly referred to as dimples), combined with a monocore that resembles monocores on serialized suppressors which are sold by Gemtech, YHM, and others.
Monocore’s are viewed as ‘unregistered suppressors’ and they are not legal to import into the United States. With the ATF/NFA, it comes down to ‘Constructive Intent’. If solvent traps are being sold with center markings or holes drilled through the cylinder, monocores or end caps, then they are constructively being sold as ‘unregistered suppressors’. We provide cleaning guides that show customers how to clean their firearms and use solvent traps for their sole intent – to trap solvent. They work great and make clean up safe and very efficient.
The intended use of monocores, when analyzed relative to the consumer base, sellers content, and/or marketing strategy, is what the regulators consider. Most that are selling monocore solvent traps are obviously targeting the underground suppressor market. These legalities should scare the average person away from purchasing these monocore solvent traps, but surprisingly many Americans continue to buys these from shady companies and loose money from having it seized or paying court fines due to being charged with a felony.
If the legal issues involved with exporting monocore solvent traps from China isn’t a concern to you, the inferior 6061 T6 aluminum with very poor finishes should dissuade you from wanting to put them on anything more than an airsoft gun.

Foreign Companies Are Not Bound By US Law

It is very important to note that Chinese companies are not bound by American laws, and it has been rumored that many of them include an end cap opener. This item replaces the end cap and provides a clear opening at the end of the monocore solvent trap, rendering it into a suppressor for all intents and purposes.

Armory Den does not, and will never sell illegal products such as: Monocore Solvent Traps, Storage Cups with Center-marks, and/or Storage Cups with Illegal Angles (not within legal parameters of the law). Although our company specializes in cleaning, we still need to abide by regulations so our customers can continue to purchase for cleaning and improve the safety, reliability or overall performance of their firearms.
Our end caps and storage cups do not include illegal center-marks and our cup angles are 60-degrees (used to catch residual solvent), which are within legal and known guidelines. Purchasing products overseas primarily results in felony charges as your shipping address will be tied to the illegal product once seized at customs.

Armory Den sells parts and products for solvent traps. Solvent traps are a “firearm accessory”. As a firearm accessory, they can be attached to the end of the barrel and with an adapter, as a cleaning accessory. Thus, they are not considered as anything other than an accessory because a bullet, or projectile, cannot pass through the tube without modification. If you view our cleaning instructions, our solvent traps and parts all have specific uses for trapping solvent, cleaning efficiency, storage, storage during transport, convenience, and more!

Only after getting the approved Form 1 back can you make any modifications to the product. A crime is committed if you make the alterations before obtaining the tax stamp. Do not make any alteration or modifications to our products before getting the approved Form 1 back.
Solvent traps can be purchased legally without a Form 1. However, you cannot alter, modify, or redesign them into a device for muffling, silencing, or diminishing the report of a firearm without first filing and receiving back from BATFE an approved Form 1 – Please be aware of the restrictions and regulations.

DISCLAIMER: This blog post is not legal advice. The information provided is for educational purposes only. Legal advice may only be provided by a properly licensed attorney. We strongly recommend you consult a lawyer. 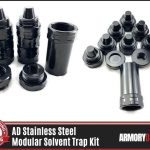 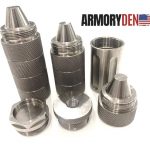 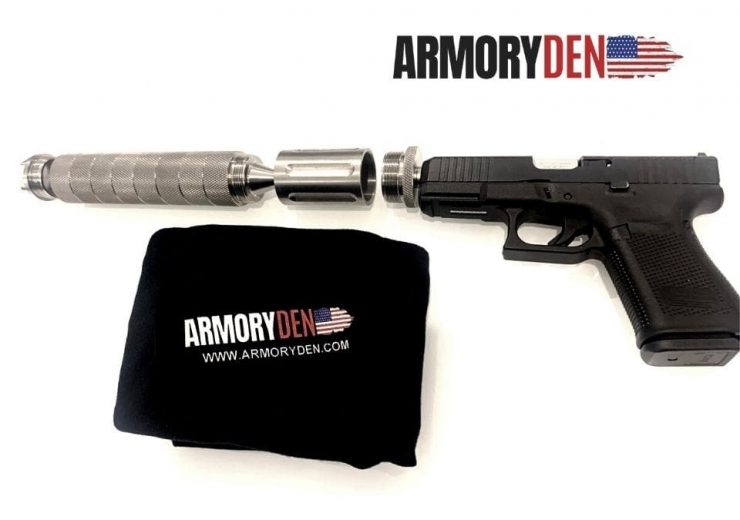 Why Do People Form 1 Their Solvent Traps?

Please note this article does not recommend or endorse modifications or alterations to... 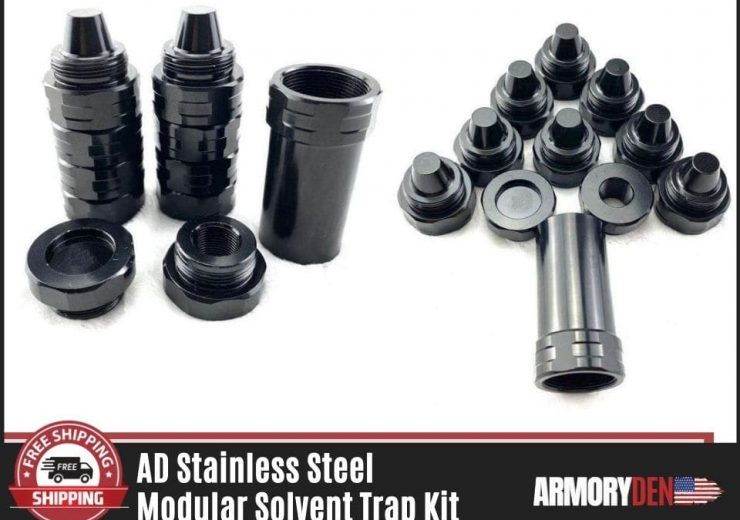 5 Things You Need to Know About Solvent Traps

What's a Solvent Trap? A solvent trap is a “firearm accessory”. As a firearm...

Apply Today & Join Our Dealer Den! Our Wholesale Solutions Are A Great Fit For Both Online And Storefront Firearm Retailers...

Solvent traps can be purchased legally without a Form 1. However, you cannot modify, alter or redesign them into a device for silencing, muffling or diminishing the report of a firearm without first filing & receiving back from BATFE, an approved Form 1. Please be aware of the restrictions and regulations, and those within the state you reside.